CAN YOU HELP or DO YOU NEED HELP after the storm?Learn More.

Our history is best organized around the pastors who have led us for more than a century.

In June 1902, the Louisiana Board of Missions sent Rev. E. K Robinson to the Lafayette area to organize a Baptist church. On November 23, 1902, the First Baptist Church of Lafayette began with five charter members in the Presbyterian Church on Buchanan St.

Rev. J.I. Kendrick became the first permanent pastor in 1904. The population of Lafayette at this time was 7,000. With his bicycle for transportation, Brother Kendrick visited people of all faiths. He obtained the use of the Jewish Synagogue and other places for worship. In 1909 the church was able to secure property, and the dedication of the “little brick church” on February 10, 1910, gave the church a permanent home.

Five men pastored the church over a 14 year period. Construction of a pastor’s home, more efficient organization of the Sunday School, and the beginning of a work among students that resulted in the Baptist Collegiate Ministry are highlights of this period. A wood frame “tabernacle” was built to accommodate a larger congregation.

J.C. Wells led the church to begin a radio ministry in 1935 and to start the first mission church in 1939.  In 1940 the property where the sanctuary currently sits was purchased, and in 1943 Brother Wells personally secured the present BCM property on Johnston St.

Dr. R.L. Holmes brought to completion the vision of a new place of worship, and on February 13, 1949, a record 473 people marched down Lee Avenue to the building that would serve the church for 50 years.

Evangelistic commitment and aggressive expansion of facilities under Perry Sanders characterize this period.  Outreach was enhanced through a television ministry and a strong music ministry led for 38 years by Luther Burney.  A prayer ministry, Christian school, and other ministries extended the church’s witness in Acadiana. For more about the life and ministry of Perry Sanders, click here.

In the fall of 2006, Dr. Steve Horn unveiled Vision71, based on Psalm 71:14 – 19, as a long-range plan for the church to take “the same gospel… to the next generation…until all the nations know…all for God’s glory.” During his first few years as pastor, a contemporary worship service and third Sunday School were added, two additional educational/fellowship buildings were completed, First Baptist Christian School expanded to include a High School, and the relationship with the University of Louisiana at Lafayette was strengthened. Strong Bible teaching, both from the pulpit and in the classroom were central to his ministry, and missions involvement locally and globally were the focus of our efforts.

On March 8, 2020, the church called Dr. James Pritchard of Forney, Texas, as Senior Pastor. Following that joyous Sunday with a near capacity attendance, the next Sunday had a small attendance due to a pandemic, and during the following week the nation was put in lockdown. Dr. Pritchard quickly moved the church to livestream worship and zoom Sunday School and began his ministry preaching by video and working remotely from Texas. Worship and Sunday School resumed in the summer, and in the fall almost all ministries were underway. Dr. Pritchard brought a renewed evangelistic emphasis and a dynamic preaching style to our congregation. 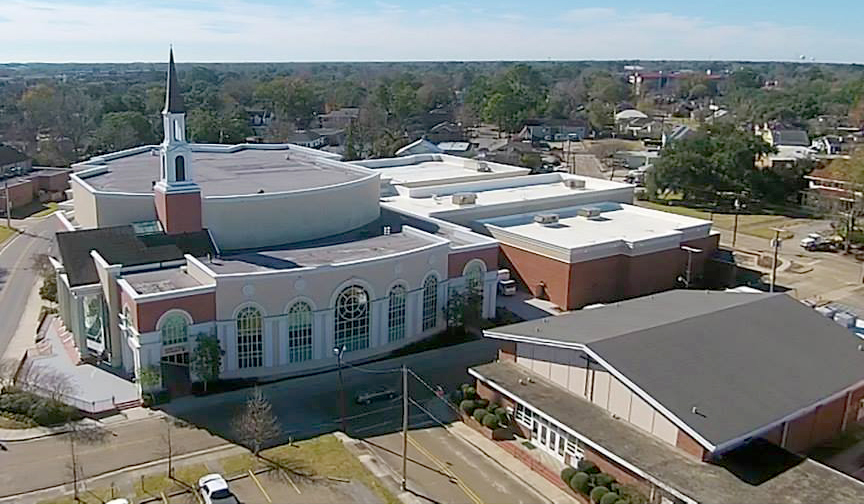