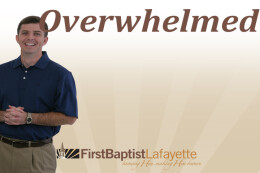 Text Introduction:  We have been talking about being overwhelmed.  First, we have considered some Biblical examples of people who went through periods of feeling overwhelmed with their circumstances.  Today, we are going to adjust our focus just a bit, still considering individuals, but very specifically considering the circumstances that caused other Biblical heroes to be overwhelmed.

We begin today with the most overwhelming of all overwhelming circumstances that we can face.  We are talking about being overwhelmed by our sin.

There are many examples that come to mind.  I want to focus our attention primarily on Peter.  The Peter that was so powerful in his proclamation on the day of Pentecost, as recorded in Acts, is rather pitiful in his denial of Christ in the days surrounding Jesus’ Passion.

The Gospels tell us that Jesus warned Peter, “The rooster shall not crow this day before you will deny three times that you know me.” (Luke 22:34)  After Jesus’ arrest, Peter follows at a distance.  As the mob gathered around Jesus, true to His prophecy, Peter denied knowing Jesus.  Hear the words of Luke 22:61-62.  The words are telling.

“62 And the Lord turned and looked at Peter. Then Peter remembered the word of the Lord, how He had said to him, “Before the rooster crows, you will deny Me three times.” 62 So Peter went out and wept bitterly.

We fast forward several days to several weeks perhaps to after the death, burial, and resurrection of Jesus.

Text:   1 After these things Jesus showed Himself again to the disciples at the Sea of Tiberias, and in this way He showed Himself: 2 Simon Peter, Thomas called the Twin, Nathanael of Cana in Galilee, the sons of Zebedee, and two others of His disciples were together. 3 Simon Peter said to them, “I am going fishing.”
They said to him, “We are going with you also.” They went out and immediately got into the boat, and that night they caught nothing. 4 But when the morning had now come, Jesus stood on the shore; yet the disciples did not know that it was Jesus. 5 Then Jesus said to them, “Children, have you any food?”
They answered Him, “No.”
6 And He said to them, “Cast the net on the right side of the boat, and you will find some.” So they cast, and now they were not able to draw it in because of the multitude of fish.
7 Therefore that disciple whom Jesus loved said to Peter, “It is the Lord!” Now when Simon Peter heard that it was the Lord, he put on his outer garment (for he had removed it), and plunged into the sea. 8 But the other disciples came in the little boat (for they were not far from land, but about two hundred cubits), dragging the net with fish. 9 Then, as soon as they had come to land, they saw a fire of coals there, and fish laid on it, and bread. 10 Jesus said to them, “Bring some of the fish which you have just caught.”
11 Simon Peter went up and dragged the net to land, full of large fish, one hundred and fifty-three; and although there were so many, the net was not broken. 12 Jesus said to them, “Come and eat breakfast.” Yet none of the disciples dared ask Him, “Who are You?”—knowing that it was the Lord. 13 Jesus then came and took the bread and gave it to them, and likewise the fish.
14 This is now the third time Jesus showed Himself to His disciples after He was raised from the dead.

Introduction:  As you can tell we are preparing this morning to observe the LORD’s supper.  The reason is simple.  It is my belief based on the teaching of Scripture that this table is symbolic of the forgiveness that we have in Christ.  So, what should we do when we feel overwhelmed by sin?  First, we need to be forgiven.  Then, if forgiven, we ought to celebrate that forgiveness.  We celebrate that forgiveness by observing the LORD’s table together.

I think that’s what Peter was doing by going fishing.  He was running away in his shame from the ministry.  He knew by now of the resurrection.  He just wasn’t sure that he was going to be used in whatever was coming next.  So, he did what we do when we feel ashamed.  He ran.  But, notice what Peter did when he realizes that Jesus is the one giving fishing directions.  He runs to Him.

Again, Peter ran away because of his guilt.  The problem with running away is that we experience more guilt—more shame.  But then, there is Jesus inviting us to a meal.

Outside of Peter, another person overwhelmed by sin that comes to mind is David.  David is the best example of covering up sin.  He had an affair with Bathsheba.  Then, he had her husband killed to cover up that sin.

Psalm 32 is David’s commentary on the difference between covering up sin and uncovering sin.

1 Blessed is he whose transgression is forgiven,
Whose sin is covered.
2 Blessed is the man to whom the LORD does not impute iniquity,
And in whose spirit there is no deceit.
3 When I kept silent, my bones grew old
Through my groaning all the day long.
4 For day and night Your hand was heavy upon me;
My vitality was turned into the drought of summer.  Selah
5 I acknowledged my sin to You,
And my iniquity I have not hidden.
I said, “I will confess my transgressions to the LORD,”
And You forgave the iniquity of my sin.

Can you eat a breakfast of fish and bread and worship?  Peter did.  He went fishing feeling unworthy to continue to walk as Jesus’ disciple.  He came to breakfast in a spirit of worship at the forgiveness of God.

Robert Garth committed what some refer to as a perfect crime.  He committed a murder and was not found.  Fifteen years later, he turned himself in to the authorities.  In prison, Robert would say, “My time in prison is nothing compared to the fifteen years I lived with that crime in my mind.  Nothing they could ever do to me, even incarcerating me for the rest of my life, could measure up to the imprisonment of my own guilt during the fifteen years of hiding my sin.”[1]

Why don’t you turn yourself in?  When you do, know that you are welcome at the table.